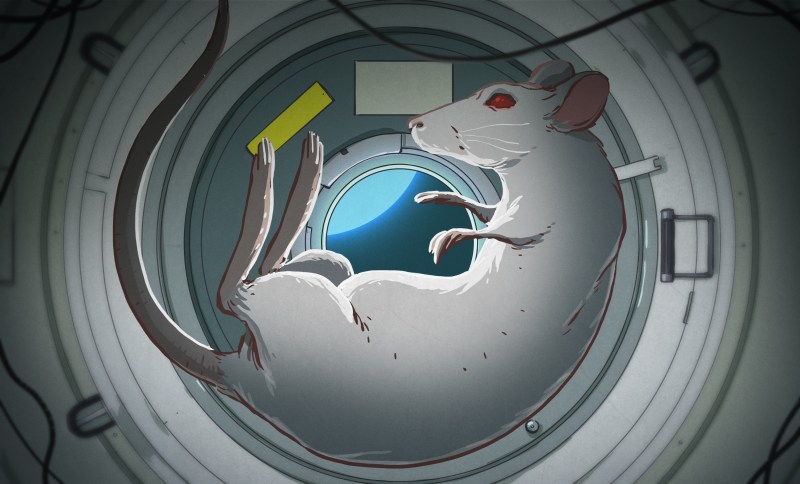 The International Space Station is humanity’s most expensive gym membership.

Since the earliest days of human spaceflight, it’s been understood that longer trips away from Earth’s gravity can have a detrimental effect on an astronaut’s body. Floating weightless invariably leads to significantly reduced muscle mass in the same way that a patient’s muscles can atrophy if they spend too much time laying in bed. With no gravity to constantly fight against, an astronauts legs, back, and neck muscles will weaken from disuse in as little as a week. While this may not pose an immediate problem during spaceflight, astronauts landing back on Earth in this physically diminished state are at a higher risk of injury.

Luckily this problem can be largely mitigated with rigorous exercise, and any orbiting vessel spacious enough to hold human occupants for weeks or months will by necessity have enough internal volume to outfit it with basic exercise equipment such as a treadmill or a resistance machine. In practice, every space station since the Soviet Union’s Salyut 1 in 1971 has featured some way for its occupants to workout while in orbit. It’s no replacement for being on Earth, as astronauts still return home weaker than when they left, but it’s proven to be the most practical approach to combating the debilitating aspects of long duration spaceflight.

Of course, there’s an obvious problem with this: every hour spent exercising in space is an hour that could be better spent doing research or performing maintenance on the spacecraft. Given the incredible cost of not just putting a human into orbit, but keeping them there long-term, time is very literally money. Which brings us back to my original point: astronauts spending two or more hours each day on the International Space Station’s various pieces of exercise equipment just to stave off muscle loss make it the world’s most expensive gym membership.

The ideal solution, it’s been argued, is to design future spacecraft with the ability to impart some degree of artificial gravity on its passengers through centripetal force. The technique is simple enough: just rotate the craft along its axis and the crew will “stick” to the inside of the hull. Unfortunately, simulating Earth-like gravity in this way would require the vessel to either be far larger than anything humanity has ever launched into space, or rotate at a dangerously high speed. That’s a lot of risk to take on for what’s ultimately just a theory.

But a recent paper from the University of Tsukuba in Japan may represent the first real steps towards the development of practical artificial gravity systems aboard crewed spacecraft. While their study focused on mice rather than humans, the results should go a long way to codifying what until now was largely the stuff of science fiction.

Perhaps the most interesting element of “Transcriptome analysis of gravitational effects on mouse skeletal muscles under microgravity and artificial 1 g onboard environment” is that the researchers didn’t originally set out to study artificial gravity, per se. The goal was to simply learn more about muscular atrophy in mammals at the molecular level as it pertains to long duration spaceflight. Traditionally, this sort of research has been done by sending one group of mice to space for a week or two and then comparing their muscle tissue to a group of control mice that stayed on Earth. But the team realized early on that such an experiment was fundamentally flawed.

When there’s a control group and an experimental group, the idea is to have both groups exposed to the exact same conditions except for the one you wish to study. In that way, you can be reasonably sure that any changes you observe were caused by that one missing element. But with the classic approach to studying rodents in space, this simply isn’t possible.

Consider for a moment the journey our experimental mice face. To start with, they’ll be shot into orbit on a rocket. Not exactly an everyday occurrence for a mouse. While in space they’ll be living in an environmental microcosm artificially maintained by the spacecraft’s life support systems, and even with shielding, will be exposed to a certain degree of cosmic radiation. At the end of their stay they get packed back into a returning spacecraft and sent hurtling through the atmosphere, only to end their ordeal by getting dunked into the ocean. Meanwhile, the control group has just been sitting in a cage in some laboratory the whole time.

These are hardly comparable experiences. Some of these elements could certainly be simulated on Earth for the control group, but not with the degree of accuracy that would be necessary to completely cancel them out. There are simply too many variables at play to exclude the possibility that they’ve impacted the results of the experiment. What the researchers realized they needed was some way to have the control group experience all the same aspects of spaceflight as the experimental group, with the exception of spending time in microgravity.

Their answer was the Multiple Artificial-gravity Research System (MARS). By utilizing a small centrifuge, the Mouse Habitat Unit (MHU) aboard the International Space Station is able to spin up half of the mice to a speed fast enough to approximate Earth gravity. The rest of the mice live in the bottom of the unit, which is otherwise identical except for the fact that it doesn’t rotate. In this way the researchers could be sure that all of the mice in the unit were exposed to the same environmental conditions, minus the presence of gravity. 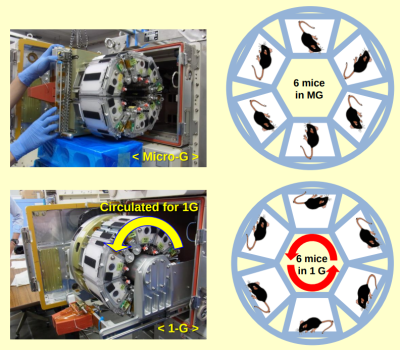 Even still, the paper explains the comparison isn’t perfect. The control group still spends some time in microgravity, as there’s no provision for providing artificial gravity while they are traveling to and from the ISS on the SpaceX Dragon. There’s also a certain amount of processing time before the mice can be removed from the Dragon and moved to the MHU when they first arrive.

That said, both the control and experimental groups go through the same process. So while the control group is exposed to a few relatively brief periods of microgravity that they wouldn’t have gone through on Earth, it’s still an environmental condition that’s shared with the experimental group.

The results of the experiment, which was actually conducted back in 2016, fall exactly in line with what scientists have believed for decades: the mice kept under artificial gravity during their stay on the ISS did not experience the same muscle loss as those in microgravity. Further, the muscle’s gene expression was found to be different between the mice in the control and experimental groups. This strongly suggests that it was the absence of gravity that caused the change, and not space radiation as was previously theorized.

There was little question that generating artificial gravity aboard the ISS was possible, and the fact that it prevented the degenerative muscle loss experienced in weightless conditions was similarly predictable. However, this experiment provided the concrete evidence demanded by the scientific method. More experiments will of course be necessary to further expand our knowledge in this field, but for the time being, it’s safe to say that spinning a spacecraft will indeed prevent mammalian muscle loss during long trips in space.

While scientists can use a centrifuge to study the effects of gravity beyond 1 g here on the Earth, there’s no way to reduce the influence of gravity in the lab. But since the ISS is already experiencing weightlessness by virtue of its location in orbit, a centrifuge can be used to produce artificial gravity between 0 and 1 g. This puts MARS in a very unique position as it could allow researchers to simulate the gravity on the Moon or Mars, giving us a glimpse at how long-duration stays on those bodies would impact human physiology.

This is critical information to have if humanity is ever to establish a permanent outpost on the Moon or conduct crewed missions to Mars. The only knowledge we have about human adaptability to lunar gravity comes from the relatively brief surface stays during the Apollo program, and we have almost no idea how the human body would respond to months or perhaps even years on the Martian surface.

The research could also have an impact on future space stations. What if you only need to simulate some fraction of Earth’s gravity to keep muscle atrophy at bay? Determining the minimum amount of gravitational force necessary to slow or even halt the damaging effects of long duration spaceflight could make producing artificial gravity much easier than is currently assumed.

At the close of the paper, the researchers hint that this is precisely the sort of experimentation they hope to conduct in the future:

Although the current study was made possible by state-of-the-art devices that implement an artificial 1 g onboard environment in the ISS, future studies of mammals will validate the effect of long-term habitation under gravitational forces weaker than 1 g, which is meant to simulate the gravity of the Moon and Mars, known as partial gravity. As experiment methods for space biology continue to develop, future studies may more conclusively identify the underlying causes and offer strategies to prevent muscle atrophy. 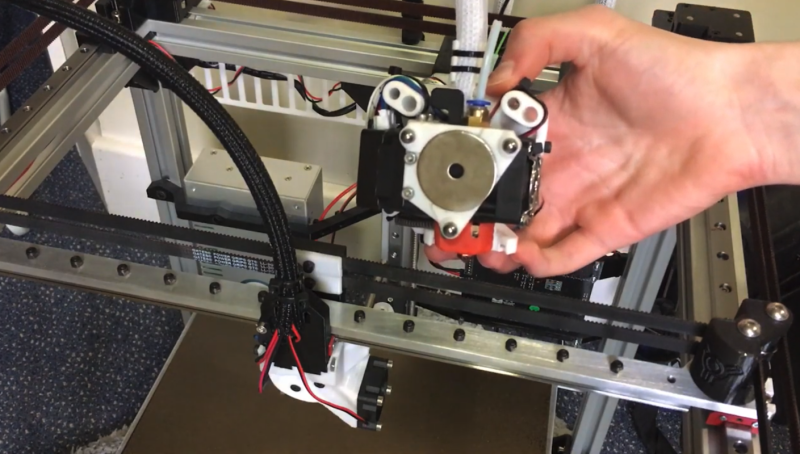 A 3D Printer with an Electromagnetic Tool Changer

A Digital Journey: A Long and Winding Road

McDonald’s discloses data breach in US, Taiwan and South Korea